SHARK has you play a down and out loan shark, with just 90 days to get the mobster Al Paca Malone $10,000. You need to pick your clients carefully and make sure to give them a good deal, or they might not pay you back. 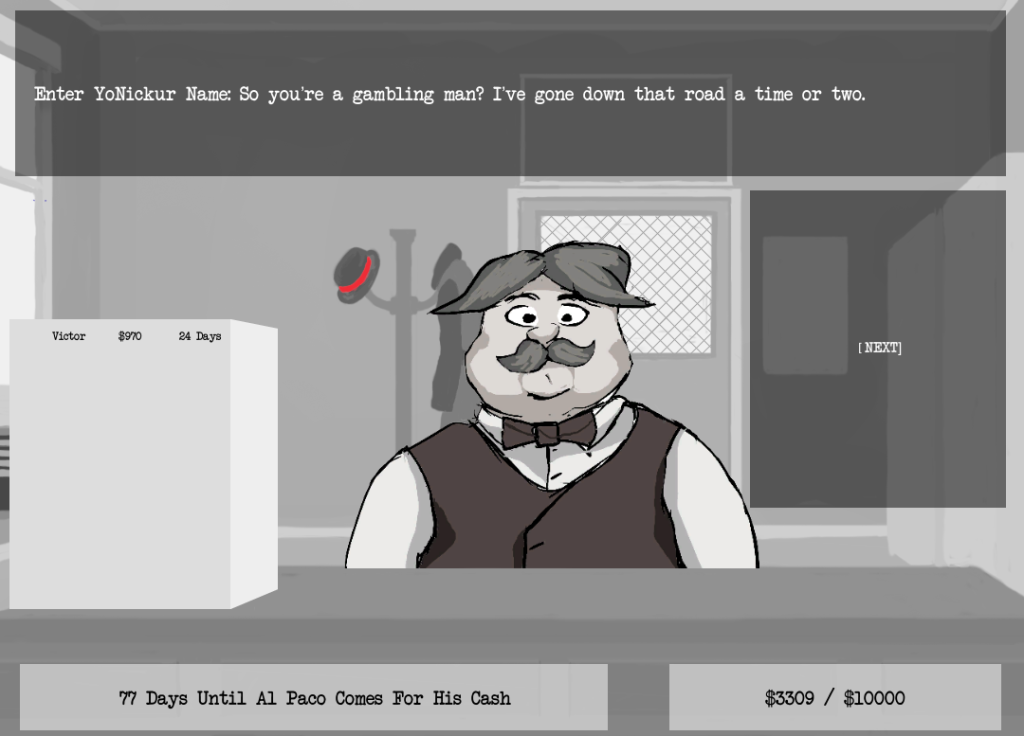 SHARK has an amazing noir ambience to it. The music combines well with the art to really ground the game in a pre-established world. There is a large amount of content too, but with the team’s 5 members, I would have expected a little more. Game mechanics are solid, but a little too unfathomable for me. A help screen or a brief tutorial might have helped here. On the other hand, not knowing exactly how to get your money back makes the game very replayable. This is helped along by the wide variety of characters and dialogue options.

Additionally there’s some ambiguity about whether the dialogue options you choose are the truth or not. I like to think I’m playing a desperate guy up against a wall who’ll lie to a girl about his father dying days before he could visit him just to get some extra cash. Someone else might want to think differently though, and the freedom and ambiguity here is refreshing. Impressively, SHARK manages to incorporate all three themes successfully (although the use of defenestration is only a gimmick at the end). Particularly good is the fact that the conclusion draws inevitably closer all the time, making you constantly aware of the deadline and the desperate decisions you have to make to try to save money.

Overall this felt like the most complete game submitted to the game jam – but given the size of the team this was to be expected. It’s definitely worth a few play throughs. Maybe Matthew will win big in the stock market for you – he never did for me.

EDIT: I have since been informed that one of the reasons the team were not able to produce as much content as you would have expected is because Dylan had a serious medical situation during the jam. I wish him the best of luck.

Boss Duck’s Rampage is a mad dash against the clock to throw the entire contents of your office out of the window.

This is a simple game, but nevertheless complete. Picking up and throwing away computers, plants and seats is a strangely relaxing experience which causes internal conflict with your goal – to do it all as fast as possible. The controls are a little bit fussy, but not too difficult to master and the first person mode, while basic, is very useful. The art style is cohesive and simple, but that adequately conveys the arcade styles of the game.

One negative point is the styling of the windows, which look more like light patches of wallpaper than windows, and the fact that they don’t appear to be affected at all when a bench sails through them. The GUI needs re-skinning, as it uses the stock Unity theme. Adding in a font from the Google Fonts archive would do a surprising amount to make this game feel more unique. Randomised placement of the office contents might add to the re-playability, as well as a different office styles and perhaps some scared office workers running around in a panic.

Overall this was a fresh and fun game that, while basic, really took the idea of defenestration and ran with it.

Balance between storing food and coin in the castle or giving it to the peasants to keep them happy. Make sure to dispose of thieves and bandits when they try to get at your food stores! 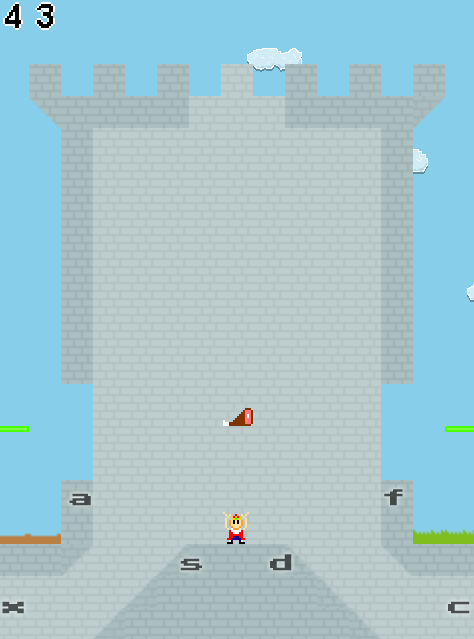 This game is a hectic sorting fest which feels overly difficult, until you master the controls and enter a zen-like state of organisation. Quick reflexes and good peripheral vision are rewarded in this game. The art is solid and consistent, and there’s plenty of it there – considering the short development time the game underwent. It’s very rewarding seeing your pile of gold slowly grow.

It is difficult, however to see when the peasants are going to become upset (there’s a thin green countdown line on turquoise). A way of telegraphing what the next item to fall will be would be nice, as well as perhaps a slightly slower start to the game for newbies. The controls could be better, perhaps allowing the player to redefine the keys would be best, but at least allowing a 2-hand control scheme would make managing the quick reactions easier. A brief tutorial might have been wise too, to let people ease their way into the difficult control scheme and to understand all of the icons on screen.

Overall I felt this game was one of the most fun of the offerings, with a manic and frenzied pace. The use of the scrimping mechanic was excellent, and overall incredibly impressive for only 8 hours.

2D Sandbox Game is a well-named 2D Sandbox Game that feels reminiscent of minecraft. You can add or remove 2D blocks around you and must make food to survive. 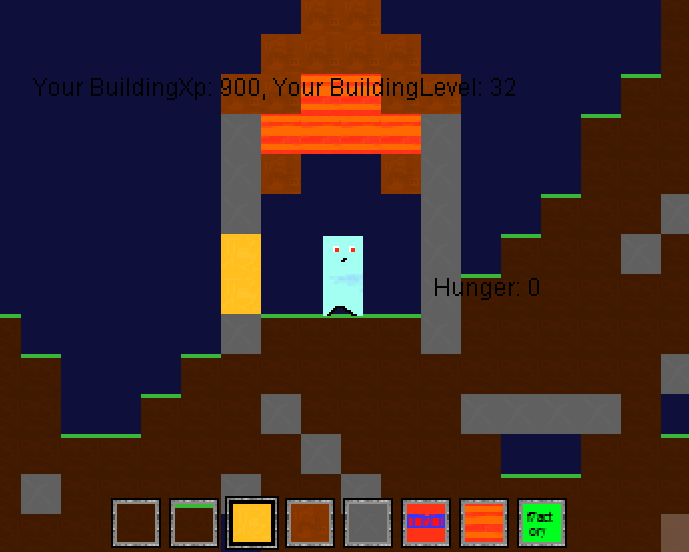 The game is still in the earliest of alphas, but already there’s a fair amount of work you can see. There are player animations, rudimentary enemy AI, a hunger system, the beginnings of a tilemap system and the creating of new blocks by combining old ones.

Running around the randomized terrain is fun, but a lot of the game feels placeholder to me. The hunger system has no negative or positive effects I could discern, and the enemy AI doesn’t seem to affect you in any way either, although I could have been doing something wrong. It’s quite difficult to work out what you’re meant to be doing, because the text that tells you is one long unwrapped string trailing off into the distance. Chasing the guide text is a fun goal that lets you explore more of the world, but the day/night system can make it very hard to read.

The blocks are varied, and some of them have other functions, according to the guide text, but it was difficult to work out which blocks were which (Hamburger block?) but eventually I got it through trial and error. Some particle effects on TNT detonation would be fun, as well as some sounds for the game.

Overall it’s a fantastic start for what could be an incredibly rich and complex sandbox game. This will be one to watch in the future, but it’s just not quite there yet.

Brain Tumor Lawyer has you playing as a lawyer giving their closing argument in a corporate fraud case, with one complication – a brain tumour messing with your ability to talk.

While your lawyer character gives his speech you must navigate the perilous scrolling blocks and through the right gates to get him to give a coherent speech. 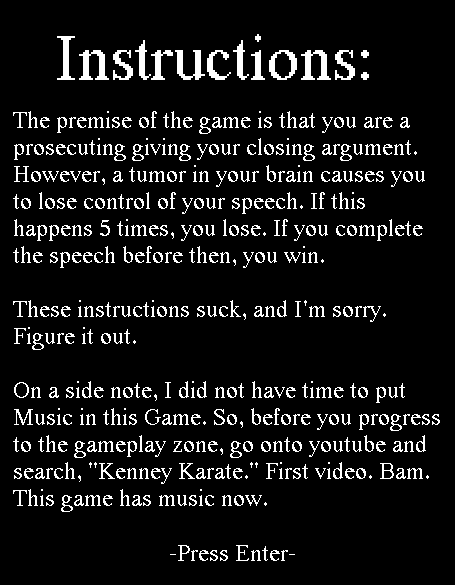 The first thing you notice when you boot up the game is its sense of humour. You’re greeted with an intro screen that describes the game in a dismissive manner and even goes as far as to suggest you open a specific youtube video for background music (which I did – and the music fit perfectly).

The actual game itself is a fun blend of madlibs and infinite scrolling dodging games. Fly between blocks and through worded gates to get to the end of the speech. This gameplay is simple, but fun. My one gripe about it is that it is too easy to dodge the blocks, but not easy enough to work out which gate you should go through in time. Not that I’m complaining though, the best part of this game is when you lose. The mistakes your character makes when the brain tumour takes over are hilarious and made me feel a little bit bad for laughing at them.

The graphics are basic but consistent and coherent, and it’s easy to follow along with what is going on. One addition I’d like to see would be different types of obstacle to avoid, such as moving obstacles. I’d also quite like to see the game have you attempt to explain your mistakes instead of just carry on as if they’d never happened.

The game could also do with a bit of proof-reading. The video we’re compelled to search out on Youtube is actually Kennedy – Karate for a start and there are a few others besides, which wouldn’t normally be an issue if this weren’t a game that hugely revolved around text. I also think its use of theme was ok, but there have been some better examples in this jam.

Overall this is a fun, complete experience based around a funny idea and good execution, but try to include the music yourself next time, hm?

And the winner is…

Now without further ado, I am pleased to announce the creator of my favorite game of the jam and the Host of The Arbitrary Gamejam for October 2013:

Congratulations to Brendan! Please leave a comment below or message me directly if you are unable to host next month.

3 thoughts on “The Arbitrary Gamejam #2 Feedback and Winner”