Time for some highly unfocused progress!

I’ve continued working on my storyboard editor. I now have conditional choices, which will grey out certain choices and prevent the player from selecting them based on certain game triggers / player stats. This’ll save a ton of boilerplate in the storyboard, reduce overall file sizes and allow me to do some cooler things like RPG elements.

I’ve also added an “End Game” state, which it kinda needed because what’s a story without an ending, or several? 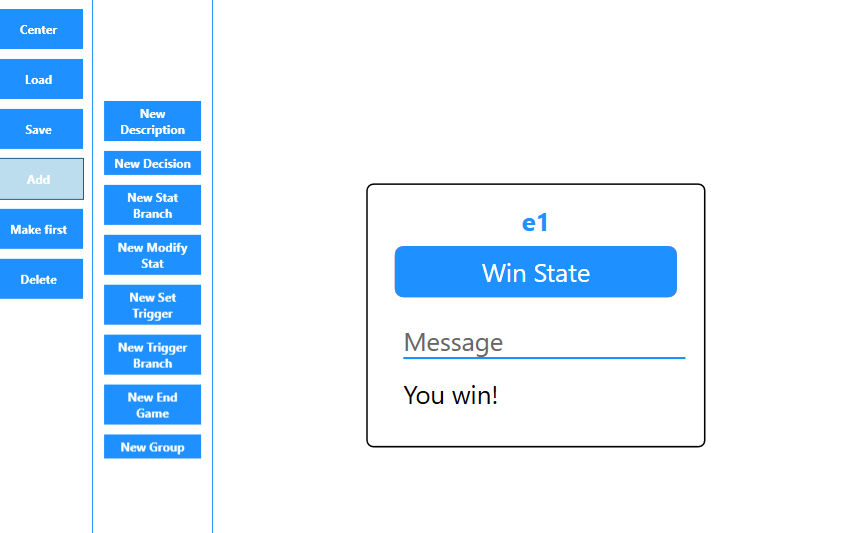 I’ve decided due to my major issues with releasing anything to work on one side project per month, with the goal of having something releasable (even if it’s a free alpha) by the end of every month. This will be while working on the next Hyper Gauntlet version. Hopefully this will curb my tendency to start and never finish a billion projects.

I’ve begun some preliminary groundwork on December’s project, a game where you build tanks / ships (I’ve not decided yet) and code them yourselves using a node-based programming interface. I’ll be reusing a lot of tech from my Choose Your Own Adventure maker because code reuse is a great idea and saves so much time. Here’s some stuff I’ve been working on

Pixel art normal maps! Pretty simple technique really, create a diffuse map in an art program, add no lighting to this. Then create a height map for the diffuse. Use Unity to convert the height map to a normal map and attach both to a Unity Standard shader. Looks pretty sweet, huh?

I did a bit of experimenting on composite ships, using a couple of bits of programmer art. Unfortunately I forgot to turn off the rotators, and you end up with this monstrosity.

But here’s what it looks like with those rotators turned off, much better!

I’ve also been working on my pixel art. I decided I was fed up with my games having pretty awful programmer art, and while my vector art is okay  it’s nowhere near great, nor is it applicable to all styles of game. I’ve had some experience pixeling before, but never really took it very far. My first pixel art pieces I made as standalone bits to work on their own, these wouldn’t really work in games, but that’s ok because I just wanted to get some experience in pixeling.

This is a fighter called “The Ocelot”. It’s not great, but it got me back into some of the basic shading principles. I’ve used pillow shading pretty extensively, which is a massive pixel art no-no.

My next ship, a cruiser called Angstrom’s Hammer. is a bit larger and more detailed. I like the shading on the various beams, but I don’t like the shapes coming out of the secondary engines (the blue). I also struggle with greebling and detail right now. Everything either feels too blank or too cluttered to me. Hopefully I’ll manage to overcome that soon, but I haven’t managed to yet.

A rock! Because most games have rocks. Finally managed to drop pillow shading, I think, and the art looks better for it. I’m not every good at shadow perspective yet, but you have to start somewhere, right?

Rather surprisingly, this cloud started off life being my most hated piece. I just couldn’t get the shaping or detail level right. There’re still some bits I’d like to change, but I’m now really happy with it.

That’s it for this irregular period of time, come back at some point in the future for another update on dev goings on!

For National Novel Writing Month I’ve decided to do something a little different by setting out to make a Choose Your Own Adventure game in Unity.

For most of the first two weeks I’ve been working on an editor using Microsoft’s Automatic Graph Layout that will help me build up the choose your own adventure quickly and easily. Now I’m proud to announce that it’s finished. Here’s a shot of it in action. 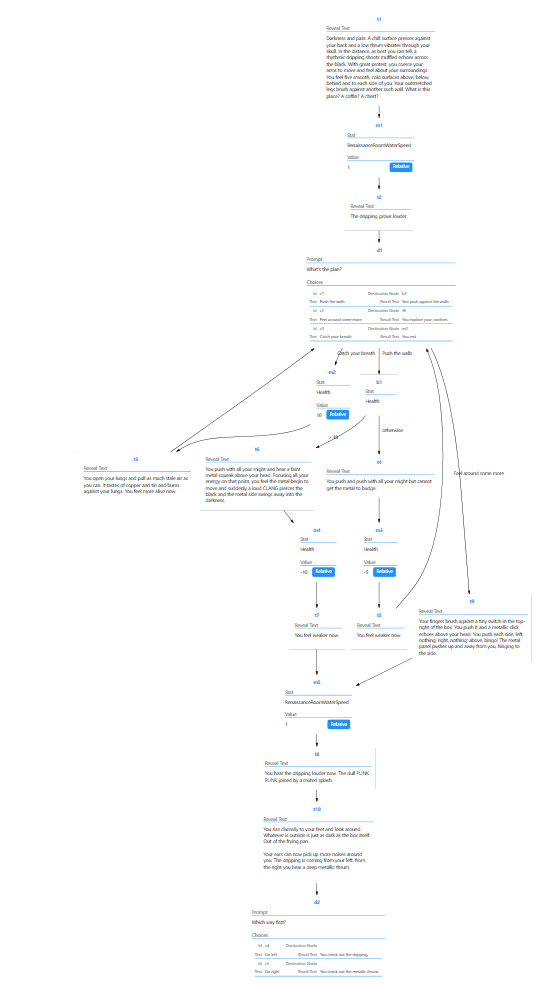 The first few steps in my choose your own adventure

Each node represents a story point, and the edges are the connection. I currently support 4 node types, with more coming after November’s writing marathon is finished. Whelp, I’d better get back to writing. Watch this space for more!

More work on my Choose Your Own Adventure Designer! This combined with a planned statistic setting node will be the last work I do on it until the end of NaNoWriMo. 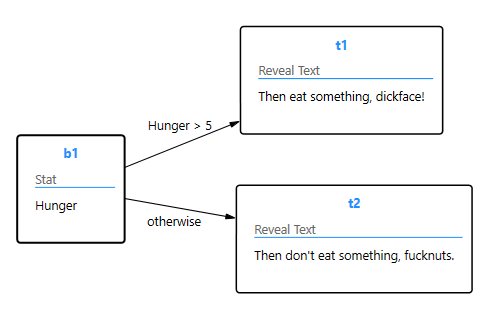 This new addition lets you branch your story based on player statistics. It’s going to be pretty essential in helping me work out how to respond to the player’s dwindling vitals.

Ideally I’d like to add a “clone group” function that lets me group a set of common nodes, and then repeat them all over the place. It’d be great for reacting to stuff. On top of that I reckon spawning adventure trees based on events (optionally returning to the previous tree when finished) would be cool for some truly rich narrative, e.g. starting plot points based on game events, or perhaps based on vitals. Lastly I’d like to support greying out certain Decision node choices based on player statistics, this would let me do some Bioware RPG style dialogue choices, etc. based on player statistics or player vitals. However this will all have to wait until December I think.

After that, I plan to package this up and sell it on the Unity store. Of course, that means writing an Editor script for it, and I’m not sure if I can integrate the MS graph layout stuff into it. We shall see.

Recently I decided, for NaNoWriMo, to take a break from traditional game development and make a Choose Your Own Adventure game in 1 month. I’m going with the name The Abyssal Gale for now, but I get the feeling that’s not original and I read it somewhere, but I can’t place it. A quick Google turns up nothing, so who knows?

Opening to the Abyssal Gale

I’m nearly done with the editor tooling, which will save me a whole bunch of time linking up story items. I need to be mindful of my desire to add too much functionality. Yes it would save me a little bit of time if I added a quick menu for linking nodes together, sure, but at the same time it’s just going to suck away time from the actual story-writing, which is kind of the whole point of this. Not to mention any bug I introduce now is going to cost even more time in debugging before I can continue crafting the story.

I do need to add some more nodes though, hopefully they’ll be a pretty painless setup thanks to my existing groundwork. I’m using Microsoft’s Automatic Graph Layout system, which you can fork yourself on github. I’ve made a couple of changes to get it working a bit better with WPF controls (particularly to do implicit support for automatic layout sizing, but I’ve since realized I could do that myself, I think), but it’s been surprisingly easy to get something good-looking out of it. Apparently it’s what Microsoft themselves are using for their new Visual Studio Code Map feature.